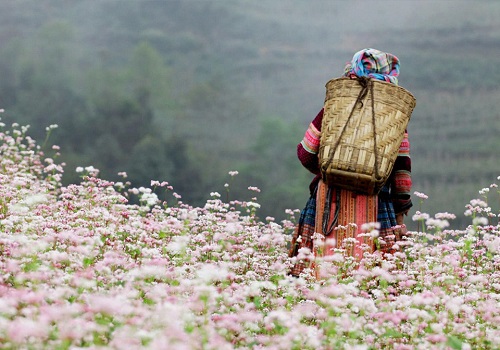 Because of its topographic, Ha Giang weather have full of features of Vietnam mountainous climate. It is a mountainous province in Northern Vietnam, the North borders on China, the West borders on Lao Cai where Fansipan is located. In detail, Ha Giang weather is piercingly cold in the winter and the temperature reaches its peak in summer. However, the weather in Ha Giang also has its own characteristics. It is cooler than the Northeast provinces, but warmer than the Northwest provinces. Especially, this is the north pole of Vietnam where has many mountain ranges creating the unique beauty of this land.

Ha Giang landscape is beautiful in any season. But if you are still wondering about the best time to visit Ha Giang, our recommendations is April, October, and December because the weather of these months is the most suitable for Ha Giang tours.

Although the weather in Ha Giang is very harsh, in April, the weather is very beautiful and suitable for traveling. The main reason is that the end of April and early May is the time for seasons to change. In detail, the temperature in Ha Giang is only about 27 to 30°C and it is usually sunny during the day. However, when it turns to dark, it is colder and the temperature falls at 18 to 20°C.

The temperature between day and night can be totally different. In addition, at this time, Ha Giang weather is quite dry, the road to Ha Giang passes, therefore, becomes more beautiful and safer than ever. Ha Giang weather in April is suitable to travel to the North Pole of Vietnam.

In October, there is less rain, fewer storms. It is mostly dry, light sunny. It can be said that Ha Giang is the most glamorous in October and November. It is a little cold in the morning, then warm and sunny at noon. The temperatures can be around 30°C. However, it is cold at night, the temperature drops significantly and can be only 10°C, even 5°C in some days.

Besides, it is time for the buckwheat flowers to bloom. It is grown in the northern mountainous provinces of Vietnam and also the symbol of this beautiful land. The fields of buckwheat show off the pink, white and purple colors beautifully.

Every year at the end of autumn, when it starts to be cold and the Northeast winds begin to blow on the northernmost lands of Vietnam, travelers will be impressed by the hills or valleys covered with flowers like white or pink carpets.

Buckwheat flowers are inherently water-resistant and low cold tolerance. They grow well in warm and cool climates with temperatures of 15°C – 22°C. Normally, ethnic people only plant buckwheat flower veins at two times: March – April and October – November. They are beautiful but not fragrant, only blooming and fading in about a month. Especially, the flowers change color over time. The freshly bloomed flowers are pure white, turning pinkish after a week. Then the purple light turns to a deep red color when they wilt.

December is the beginning of the winter in Ha Giang. The weather will start to get cold, the mist has begun to appear around the sharp, protruding cat ears rocky mountains of the Ha Giang plateau. Ha Giang weather has a low temperature, the hoarfrost has appeared but this is still an ideal time to travel to Ha Giang.

It is hardly snowing because Vietnam has a tropical climate. However, travelers can see snow in the Northern mountainous provinces, especially the high area of land such as Sapa in Lao Cai and Dong Van in Ha Giang in December. However, sometimes, snow appears in January.

It can be said that Ha Giang weather is beautiful around the year. However, you are recommended to avoid the rainy season in Ha Giang, from July to the beginning of September if you do not like to take risks on the mountain pass roads where rocks can landslide at any time. Moreover, the water of the streams in this season is swirling red. Sometimes, sudden storms from the East Sea weakening into depressions also cause heavy rain in Ha Giang. Therefore, follow the weather forecasts during Vietnam tours!