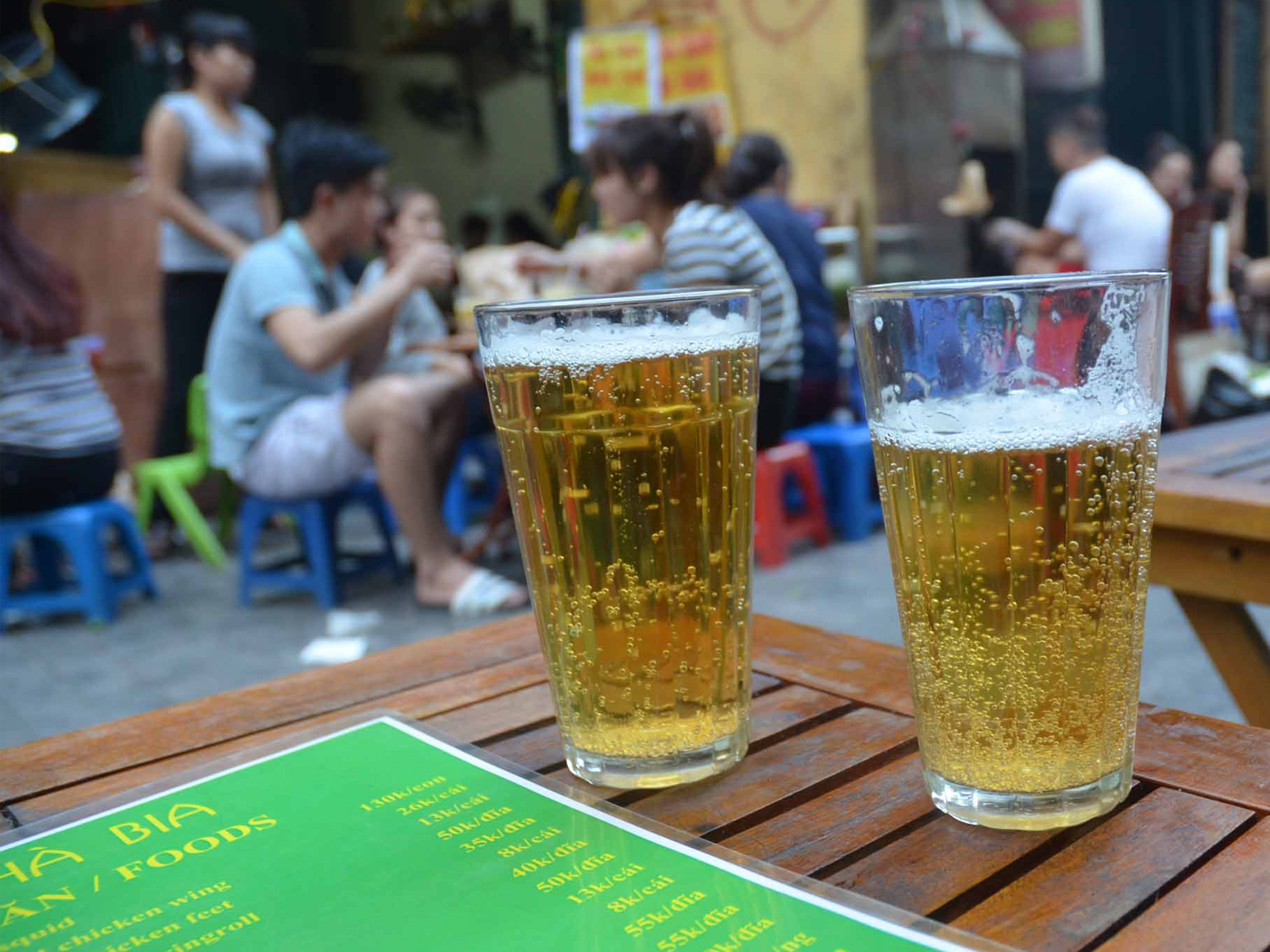 Bia hoi – the famous Vietnamese beer you should try

Despite not being the best beer in the world, Vietnamese beer and the way of drinking is worth trying because it is an indispensable kind of beverage of people here. In Vietnam, Vietnamese beer – Bia hoi Vietnam is pretty cheap and you can easily find a bia hoi store everywhere, especially, in summer beer is used to cool down your inner heat. Therefore, why don’t you try a bottle of Vietnamese beer?

When beer first arrived in Vietnam

At the end of 19th century, beer was brought to Vietnam by French. At first, due to the lack of technology and production chain, the brewing process was done entirely manually. Vietnamese beer was officially born when the two first brands debuted that were Habeco (Bia hoi Hanoi) and Sabeco (Bia hoi Saigon). Until 1970, Vietnamese government adapted the new economic policy from subsidized economy into market economy having a great impact on the beer industry. This period witnessed the birth of many joint-ventures and the beer production system have been upgraded with new equipment.

How to say beer in Vietnam

Beer is called “bia” which has the same pronunciation as English word because it is a borrowed word from French. Or you can call “bia hoi” as the full name yet “bia” is enough to understand which drink you would like to order.
If you would like to be “normal” like the Vietnamese, then when drinking beer with locals, you should say “yo” meaning “cheers” in English. Besides, if you go to restaurants, you can also see that Vietnamese young people say “mot, hai, ba yoyoyo” (one, two, three cheers) as a way to start the party or a way to mood everybody up.

As mentioned before, the two most traditional Vietnamese beer brand is Habeco with Hanoi beer and now Truc Bach beer, Sabeco with Saigon beer and 333 beer. Today, you can see a lot of foreign beer brands sold at supermarkets or restaurants; hence, you can choose any brands that you prefer.
Usually, beer in Vietnam is poured into a mug with ice cubes rather than refrigerated beers straight from bottles or cans. This type is draft beer (bia hoi). “Bia hoi” is a kind of beer which is brewed in a short period (from 7 to 10 days) and the sugar contain is lower than the other.
In addition, Vietnamese beer is stored in bottles and cans; therefore you can bring them to anywhere or buy them anytime whenever you feel thirsty. The second kind of beer in Vietnam requires longer period for brewing. The primary fermentation lasts for about 5 – 7 days and the second fermentation lasts for more than 6 days. Then, the beer is filtered, stabilized with carbon dioxide gas and extracted.

Where to buy beer in Vietnam

Big cups of beer are sold at “quan bia” or “quan nhau” where men or groups of friends tend to gather together and spend whole night drinking and talking. At these places, there is no counter so, if you want to pay your bill you pay to the owner. The most popular places to enjoy Vietnamese beer and the atmosphere of drinking beer like local people, you can go to Ta Hien street (Hanoi) or Bui Vien street (Ho Chi Minh city).
At street shops, it sells for about 8,000 – 18,000 VND per can depending on the brand. When you go to Ta Hien or Bui Vien street, the price of a bottle of beer can go up to 50,000 – 70,000 VND. Normally, local people tend to order some dishes of boiled peanuts, in Vietnamese words, we call “đồ nhắm”.

Vietnamese young generation nowadays prefer going to more fancy, high-class and Western-like places for beer; such as sport bar and sky bar. Their price, obviously, is much higher than that of small pop-up restaurant on the pavement.

In a nutshell, it is said that Vietnamese beer is the cheapest kind in the world; but the atmosphere of enjoying beer is fairly unique that you can not find anywhere else other than Vietnam. Therefore, if you spend your holiday in Vietnam during Indochina tours, why don’t you try a little bit mugs or bottle of Bia hoi. Then let us know your feeling.
Suggested Vietnam tours for the best experience with Bia hoi: